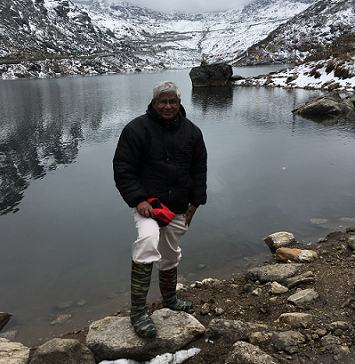 Prof.Dr.Vee is a Music Information Technologist from India, being the first Indian Doctorate in the interdisciplinary field of Physics, Music and Ancient Tamil Text. This is the official website of Dr.Vee, created by his son for the purpose of celebrating and supporting Dr.Vee’s work.

The Logic of Defreezing the Music from the Building Architecture, started from Vitruvius (80 -15 BC), and pursued by  Iannis Xenakis, among many others in the modern era, was finally discovered by Dr.Vee, as the Project Consultant of the on-going R & D project at National Institute of Technology, Trichy, India, with patent and published in SCI journal ‘Multimedia Tools and Applications – Springer‘

“Very intriguing.  I hope all of this can become part of an emerging discipline of ‘Musical Linguistics’ “ – Prof.Noam Chomsky (Emeritus at Massachusetts Institute of Technology)

‘Musical Threads’ & ‘ MUXEL’ – A New Concept in Digital Music for Enhanced Aesthetics’ –  Like PIXEL in visual graphics, MUXEL in musical aural graphics, was the result of the convergence of the above discoveries with the  ‘Sruthi’ concept, and ‘MICROSOUND’.

“The concept of “Muxel” as opposed to “Pixel” has undoubtly a creative potential, which is worth to be further developed.”- Comment from Robert Peck, Editor in Chief, Journal of Mathematics and Music, SCI Journal.
—–
www.muxel.sg to publish and support the R & D of Dr Vee